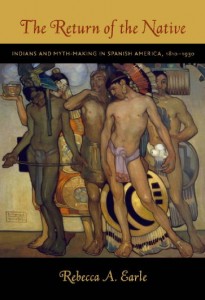 Why does Argentina’s national anthem describe its citizens as sons of the Inca? Why did patriots in nineteenth-century Chile name a battleship after the Aztec emperor Montezuma? Answers to both questions lie in the tangled knot of ideas that constituted the creole imagination in nineteenth-century Spanish America. Rebecca Earle examines the place of preconquest peoples such as the Aztecs and the Incas within the sense of identity—both personal and national—expressed by Spanish American elites in the first century after independence, a time of intense focus on nation-building.

Starting with the anti-Spanish wars of independence in the early nineteenth century, Earle charts the changing importance elite nationalists ascribed to the pre-Columbian past through an analysis of a wide range of sources, including historical writings, poems and novels, postage stamps, constitutions, and public sculpture. This eclectic archive illuminates the nationalist vision of creole elites throughout Spanish America, who in different ways sought to construct meaningful national myths and histories. Traces of these efforts are scattered across nineteenth-century culture; Earle maps the significance of those traces. She also underlines the similarities in the development of nineteenth-century elite nationalism across Spanish America. By offering a comparative study focused on Mexico, Guatemala, Colombia, Peru, Chile, and Ecuador, The Return of the Native illustrates both the common features of elite nation-building and some of the significant variations. The book ends with a consideration of the pro-indigenous indigenista movements that developed in various parts of Spanish America in the early twentieth century. © 1998-2001 Amazon.com, Inc. und Tochtergesellschaften