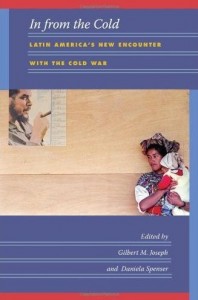 Over the last decade, studies of the Cold War have mushroomed globally. Unfortunately, work on Latin America has not been well represented in either theoretical or empirical discussions of the broader conflict. With some notable exceptions, studies have proceeded in rather conventional channels, focusing on U.S. policy objectives and high-profile leaders (Fidel Castro) and events (the Cuban Missile Crisis), drawing largely on U.S. government sources. Moreover, only rarely have U.S. foreign relations scholars engaged productively with Latin American historians who analyze how the international conflict transformed the region’s political, social, and cultural life. Representing a collaboration among eleven North American, Latin American, and European historians, anthropologists, and political scientists, this volume attempts to facilitate such a cross-fertilization. In the process, “In From the Cold” shifts the focus of attention away from the bipolar conflict, the preoccupation of much of the so-called ‘new Cold War history’, in order to showcase research, discussion, and an array of new archival and oral sources centering on the grassroots, where conflicts actually brewed. The collection’s contributors examine international and everyday contests over political power and cultural representation, focusing on communities and groups above and underground; on state houses and diplomatic board rooms manned by Latin American and international governing elites; on the relations among states regionally; and, less frequently, on the dynamics between the two great superpowers themselves. In addition to charting new directions for research on the Latin American Cold War, “In From the Cold” seeks to contribute more generally to an understanding of the conflict in the global south. © 1998-2001 Amazon.com, Inc. und Tochtergesellschaften

Gilbert, Joseph M., Daniela Spenser. In from the Cold: Latin America’s New Encounter with the Cold War. Duke UP, 2008.