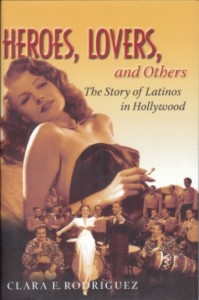 Heroes, Lovers, and Others tells the fascinating history of Latino actors in American film from the silent era to today. Rodriguez examines such Latino legends as Desi Arnaz, Dolores del Rio, Rita Hayworth, Raquel Welch, Anthony Quinn, Selma Hayek, and Antonio Banderas More than just a collection of celebrity stories, the book explores the attitudes, cultural conditions, and assumptions that influenced the portrayal of Latinos in film as well as their reception by the public. Heroes, Lovers, and Others is a comprehensive volume packed with carefully researched information and analysis for both students and cinema enthusiasts alike. © 1998-2001 Amazon.com, Inc. und Tochtergesellschaften

Rodriguez, Clara E. Heroes, Lovers, and Others: The Story of Latinos in Hollywood. Oxford UP, 2008.