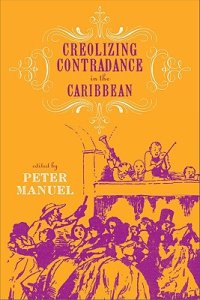 The contradance and quadrille, in their diverse forms, were the most popular, widespread, and important genres of creole Caribbean music and dance in the nineteenth century.  Throughout the region they constituted sites for interaction of musicians and musical elements of different racial, social, and ethnic origins, and they became crucibles for the evolution of genres like the Cuban danzón and son, the Dominican merengue, and the Haitian mereng.

Creolizing Contradance in the Caribbean is the first book to explore this phenomenon in detail and with a pan-regional perspective. Individual chapters by respected area experts discuss the Spanish, French, and English-speaking Caribbean, covering musical and choreographic features, social dynamics, historical development and significance, placed in relation to the broader Caribbean historical context. This groundbreaking text fills a significant gap in studies of Caribbean cultural history and of social dance. © 1998-2001 Amazon.com, Inc. und Tochtergesellschaften

Manuel, Peter, ed. Creolizing Contradance in the Caribbean. Temple UP, 2009.