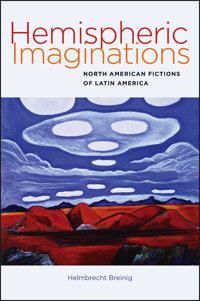 An extensive study of fictional representations of Latin America in North American literature.

What image of Latin America have North American fiction writers created, found, or echoed, and how has the prevailing discourse about the region shaped their work? How have their writings contributed to the discursive construction of our southern neighbors, and how has the literature undermined this construction and added layers of complexity that subvert any approach based on stereotypes? Combining American Studies, Canadian Studies, Latin American Studies, and Cultural Theory, Breinig relies on long scholarly experience to answer these and other questions. Hemispheric Imaginations, an ambitious interdisciplinary study of literary representations of Latin America as encounters with the other, is among the most extensive such studies to date. It will appeal to a broad range of scholars of American Studies.

“Remarkable for the ambition of its historical scope and the incisiveness of its critical analyses, this book is a landmark study in Hemispheric American literary scholarship. Engaging with both ‘classic’ and popular literary texts about Latin America written in the United States and Canada from the eighteenth century to the present by a diverse array of authors, it will be indispensable for all future investigations of the Anglo-American literary imagination about Latin America.”—Ralph Bauer, University of Maryland

HELMBRECHT BREINIG is professor emeritus of American Studies at the University of Erlangen-Nuremberg and founding director of the Bavarian American Academy, Munich. He is the author of numerous books and articles on US literature from the eighteenth century to the present, Inter-American studies, Native American studies, and cultural theory.
This entry was posted in Uncategorized. Bookmark the permalink.